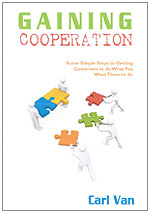 Carl Van’s new book entitled, Gaining Cooperation: Some Simple Steps to Getting Customers to do What You Want Them to, has been released by International Insurance Institute and is available by clicking Add to Cart above or at www.Amazon.com

When asked to finish this sentence, “My job would be so much easier if the customer would just…” most people say “Cooperate”. Sometimes getting customers to cooperate can be a chore, even if it is better for them. Even simple things like filling out a form, answering some questions, or sending in information can be examples where customers don’t want to cooperate.

Gaining Cooperation lays out some simple steps to teach the reader how to best handle situations where customers do not want to cooperate. It relies heavily on the fact that we want to hold onto that customer and that if you can get a customer to agree to cooperate because it is the right thing to do, then that is better than getting the customer to give in.

Relying on some of the maxims that he has developed that have become a staple in the both the Negotiation and Customer Service programs, Mr. Van applies these concepts to getting customers to cooperate.

The book takes the position that when you are trying to get a customer to cooperate; you are actually in the negotiation process. A process that you want to end with the customer cooperating, but also for them to feel that they were treated with respect by someone who is knowledgeable, and cares about trying to help them.

Mr. Van’s first book, The 8 Characteristics of the Awesome Adjuster has remained the number one selling claims book for the past five years and has sold internationally throughout the United States, Canada, Newfoundland, Guam, Singapore, France, Australia, England, Chile, Ireland, and 15 other countrie.

About the Author: Carl Van

Carl Van, Professional Speaker, graduated from California State University, Sacramento where he received his bachelor's degree in Insurance. He began his business career in 1980, moving up the management ranks and culminating in Vice President/General manager of a 600 employee company. He is currently President & CEO of an international training company.

Mr. Van has been an instructor for numerous educational associations and is the author of over 75 technical and soft skill workshops being taught throughout the U.S., Canada, Newfoundland, and the U.K. He has set up five in-house training programs for various companies throughout the nation and has written over 30 articles for many national magazines.

Mr. Van has been a keynote speaker at major conferences around the country, a trainer at an international U.S.-Japanese executive training program, a guest speaker at hundreds of association seminars, and selected as the opening presenter at some of the most prestigious conferences in the nation.

He is the Dean of the School of Performance and has served as Regional Vice President of the Society of Insurance Trainers and Educators.

He is the author and presenter of four on-line video training courses, as well as the author of two highly acclaimed books on the characteristics of truly exceptional employees which have sold in the U.S., Canada, Guam, Australia, England, Ireland, Singapore, Chile, India, and many other countries around the world.